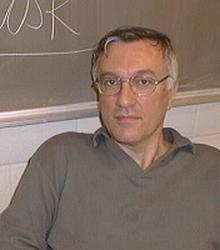 "If you get a letter of recommendation that counts number of publications, rather than commenting substantively on a candidate's contributions, ignore it."

"Under the current funding regime, is it possible to obtain support for long-term basic research with little apparent prospect of practical applications? ... Now only safe, incremental "normal science" (Thomas Kuhn) is funded and published, not paradigm shifts. Creativity is slaughtered. ... We are clearly going in the wrong direction now in some societies where creativity is micromanaged by gigantic bureaucracies."

"In between writing grand proposals describing what I intend to do, and writing reports about what I have done, there in no time left to actually do anything!"

Mario Livio: The Equation That Could't Be Solved. How mathematical Genius Discovered the Language of Symmetry, Simon & Schuster, New York, 2005.

The following technical & scientific subjects haunted me in the last few decades:

The following political problems harassed me in my short political involvement as member of Petre Roman Government 2:

My civic involvement is a sequel of my short politic adventure. Resulted some sporadic actions and opinions referring to the (too) perennial Romanian problems: